As Russia continues its invasion of Ukraine, Russian state-backed media outlets are gaining popularity in Spanish language-related content. RT en Español is the third most-shared domain on Twitter for Spanish posts discussing the war, while Sputnik News is among the top 15. The most-engaged with posts containing links to these domains have been published by Russian diplomatic accounts and catapulted by inauthentic Twitter accounts.

As previously reported by the DFRLab, RT en Español is one of RT’s most popular language services on social media, with more than twice the number of Facebook followers than RT’s English version. Amidst Russia’s invasion of Ukraine, pro-Kremlin outlets publish disinformation and propaganda, including false flag narratives and claims to justify the invasion.

Given the popularity of RT en Español in Latin America, it raises the question of whether Russia’s activities may influence the online information environment in the region by exploiting war narratives and conspiracy theories. When Russia recently issued a list of “unfriendly” countries, for example, no Latin American country was included. Additionally, Cuba, Nicaragua, and Venezuela openly supported Vladimir Putin ahead of the invasion.

The DFRLab is tracking Russia’s movements across the military, cyber, and information domains in its ongoing Russian War Report.

According to a search query using the social media monitoring tool Meltwater Explore, RT en Español is among the most-shared domains on Twitter in terms of Spanish-language discussions about the war in Ukraine. To measure the engagement from Spanish language pro-Kremlin media, the DFRLab collected Twitter posts published between February 24 and March 11, 2022, containing any of the following keywords in Spanish: Ucrania (“Ukraine”), Ucranianos (“Ukrainians”), and other words derived from them; Rusia (“Russia”); Putin; Zelensky; Kiev (the Spanish spelling for Kyiv); Rusa (“Russian”); and Donbas. These were then filtered to identify tweets containing links to 34 domains primarily comprised of media outlets. 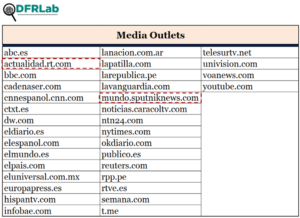 The DFRLab selected these domains, comprised of Spanish language media outlets and platforms such as Telegram and YouTube, based on their similarity to RT en Español and Sputnik News as determined by SimilarWeb audience interest data. According to SimilarWeb, the most similar sites to these are bbc.com, cnnespanol.cnn.com, elpais.com, and infobae.com. The other set of websites was determined by their popularity in Spanish-language countries, based on prior analysis conducted by Professor Kate Starbird at the University of Washington. 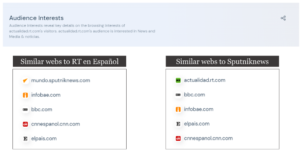 Between February 24 (the first day of the invasion) and March 11, more than 520,000 unique Twitter user accounts generated around 2.6 million posts containing Ukraine-related keywords and including at least one of the domains from the previous table. The number of posts includes original tweets, quotes, replies, and retweets. 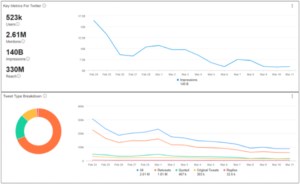 A disaggregated analysis of these posts shows that RT en Español’s website, actualidad.rt.com, is the sixth most-shared domain in original tweets. The top five domains were youtube.com, elpais.com, infobae.com, elmundo.es, and eldiario.es. When retweets are taken into account, however, RT en Español was among the top three most-shared domains on Twitter.

In the case of the Spanish version of Sputnik News, mundo.sputniknews.com, the search query results indicate that it is among the top 15 most-shared domains. 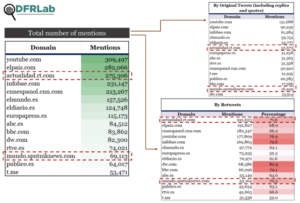 In total, actualidad.rt.com and mundo.sputniknews.com garnered nearly 345,000 mentions. Besides the Twitter accounts associated with these outlets, the most-engaged Twitter user accounts sharing links to these domains are Russian embassies in Latin America, including embassies in Argentina, Cuba, Ecuador, Guatemala, Mexico, Panamá, Perú, and Uruguay, as well as the Russian embassy in Spain. The Russian ambassador to Venezuela and the Spanish-language Twitter account for the Russian Foreign Ministry also posted content from these domains.

From this set of accounts, the Russian embassy in Mexico and the Spanish-language Twitter profile for the Russian Foreign Ministry were among the most-engaged with accounts, followed by the Russian embassies in Panamá, Argentina, and Spain. According to social network analysis, these accounts received a high in-degree value, which means that other Twitter accounts either retweeted, mentioned, or quoted these accounts’ tweets. 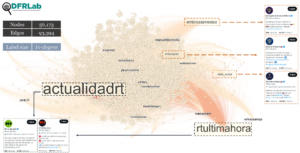 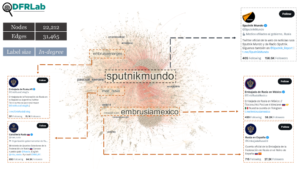 The narratives accompanying the posts from the Russian diplomatic accounts mostly shared content related to Ukrainian bioweapon conspiracy theories. Some posts alerted users to what they claimed was fake news, disinformation, and media manipulation on social media, while others primarily focused on justifying Russia’s invasion of Ukraine, pushing anti-NATO narratives and promoting Russia’s plan to “de-militarize and de-nazify” Ukraine. 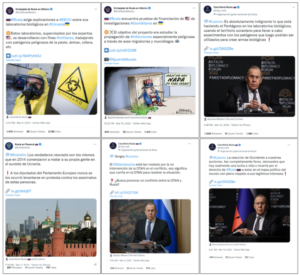 According to DFRLab’s search query, these Russian diplomatic accounts published only twenty-nine original tweets containing links to either RT en Español or Sputnik News. During the analyzed period, these posts gathered roughly 50,000 interactions, including retweets and likes. At the time of writing, these accounts amassed nearly 220,000 followers.

The most-engaged with posts containing a link to actualidad.rt.com were tweeted by the Russian embassy in Mexico, RT en Español, and the RT affiliate known as RT Última Hora. The content of these posts focused primarily on Putin’s February 24 declaration of war on Ukraine, claims about Ukraine preparing a provocation using radioactive contamination, and content amplifying anti-US sentiment from the Chinese embassy in Russia. 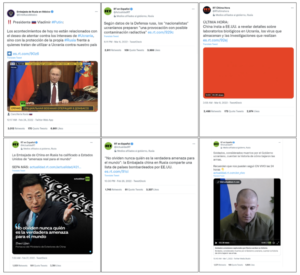 Other indicators of these accounts suggest inauthentic activity as well. The accounts publish a high volume of tweets per day, and some of them use automated tools to post their tweets, although not necessarily to publish content related to RT en Español or Sputnik News. After collecting two datasets containing the 100 most-active accounts posting links for each of these domains, the DFRLab found that 29 of them appeared in both datasets, leaving a total of 171 unique accounts for both RT en Español and Sputnik News. These 171 accounts published nearly 40,000 tweets between February 24 and March 11, 2022, representing eleven percent of all tweets containing links to actualidad.rt.com and mundo.sputniknews.com during that time period.

To explore the Twitter activity of these 171 accounts, the DFRLab analyzed their timelines. Over an eight-day window between March 7 and 14, these accounts published more than 200,000 tweets combined, resulting in an average of 155 tweets per day by each account. 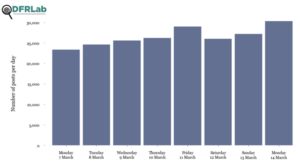 While the 171 accounts averaged 155 tweets per days, several of them posted at a far higher rate, sometimes above 500 tweets per day. 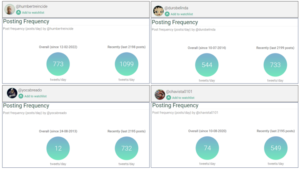 Another attribute of this set of Twitter accounts involves activity supporting the Maduro regime in Venezuela. Based on posts and retweets, these accounts published several retweets to Nicolas Maduro’s account, @Mippcivzla (Maduro’s Ministry of Communications), @VTVCanal8 (state-sponsored TV), and @TelesurTV (state-supported news). 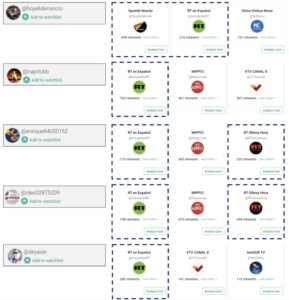 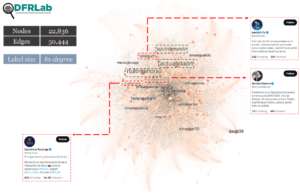 The dataset of tweets from this set of accounts also indicates that accounts relied on automation tools such as dlvr.it and IFTTT, which are applications that allow users to automate and schedule their messages on different social media platforms. 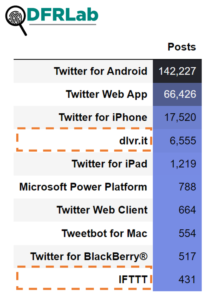 This analysis suggests that a portion of the retweets received by RT en Español and Sputnik News come from suspicious accounts with multiple indicators of inauthentic activity. Although the popularity of RT en Español in Latin America has been growing on social media, Twitter users are exposed to Russia-sponsored media via inauthentic means. The fact that RT en Español is the third most-shared outlet on Twitter in the Ukraine war conversation in Spanish is primarily due to the number of retweets, of which a large proportion have been posted by such suspicious accounts.

Russian diplomatic accounts also play an important role in the online conversation, as they have mainly spread false claims and conspiracies by amplifying narratives from Kremlin media outlets. Given that these accounts have garnered thousands of interactions in their posts, it also suggests that RT en Español and Sputnik News audiences and Twitter users in Spanish-language countries are being exposed to Russian disinformation.